What's Pasta Got to Do with Maria Agnesi ? 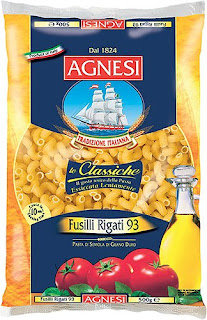 When I was growing up, we sometimes ate a brand of pasta called Agnesi, the same spelling as Maria Gaetana Agnesi's last name. (As far as I know, there's no connection between Maria's family and the pasta company.) Since I was already familiar with the pasta when I learned about Maria, I had no trouble saying her name. It wasn't until I brought a draft of the biography to my critique group that I discovered that the pronunciation isn't obvious to everyone.

Unfortunately, I haven't found a way to upload an audio file to this website, so I can't demonstrate the pronunciation for you. However, I did find the following commercial for Agnesi pasta on YouTube.

Don't try to adjust your volume at the beginning, because there is silence for the first 10 seconds or so. Then a voice says, "Silenzio, parla Agnesi," which means "Silence, the Agnesi pasta is talking." The clip allows you to hear how an Italian pronounces the name "Agnesi."

In case you're still not sure how to say it, just remember that Maria's last name, Agnesi, rhymes with "lazy," despite the fact that she was anything but. If you find phonetic spellings helpful, I'd go with on yay zee. (Keep in mind, I'm not a linguist.) Note that you do not pronounce the "g"--the letter pair "gn" in Italian is pronounced like the "ni" in "onion."

Maria's middle name, Gaetana, is a bit tricky to say, too. I would probably spell it phonetically as gah eh tah nah, though most Italians I know would combine the first two syllables together to sound like the English word "guy," so I think guy tah nah is also acceptable.

If you'd like to learn more about how to pronounce Italian words, you can see this website.

Have I made you hungry for some pasta?

Maria Gaetana Agnesi was born in Milan, Italy on May 16, 1718. It's appropriate, then, that my first post to this blog is dated on the anniversary of her birth. My friend, Fran, pointed out that the day and year of Maria's birth form a number series: 16, 17, 18. That makes it easy to remember. And I have no trouble remembering the month, because I also have a May birthday. :-)  [By the way, here's a math question for you: How old would Maria be today? The answer's at the end of this post.]

When Maria was born, the great cathedral of Milan, known as the Duomo, was still under construction. Work on the cathedral had been started four centuries earlier, in 1386. The building wasn't completed until the early 1800s, years after Maria's death. Here is a picture of an engraving that shows what the cathedral looked like during her lifetime: 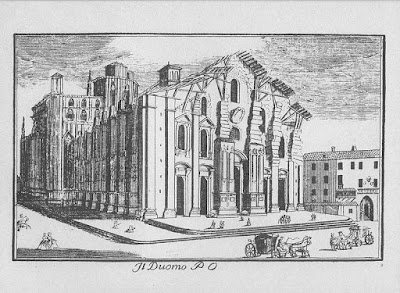 Interestingly, this engraving was done by Marc'Antonio Dal Re, the same artist who illustrated Analytical Institutions, the mathematics textbook that Maria wrote. (Dal Re created the illuminated letter in the sidebar for that textbook.) You can see a larger version of the above image, which is in the public domain, on the Wikipedia site.

And here is a section of what the Duomo looks like today (from clipart): 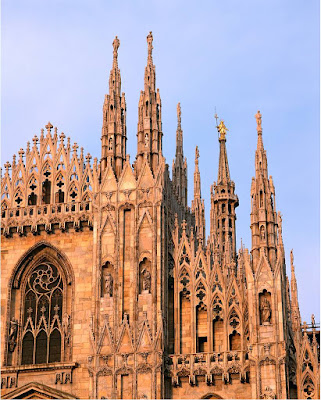 So, have you figured out the answer to the math question: How old would Maria be today? Well, on the date of this post, May 16, 2010, she turns 292! Happy birthday, Maria!
Posted by Carmela Martino at 4:00 PM 2 comments: