A Not So Pleasant Birthday Present: The Writer's Almanac Gets it Wrong

Although this blog is officially "on hold," I thought I'd take a quick moment to acknowledge Maria Gaetana Agnesi's birthday, and to correct some misinformation posted about her today at The Writer's Almanac. According to the almanac:


"Maria was shy and devout, and she longed to give up her public speaking and enter a convent. Her religious aspirations were dashed, however, when her mother died and she was left in charge of the household and the care of her many siblings."

This information contains another common myth about Maria: that she had to care for her siblings after her mother died. While it is true that Maria was shy and devout, her mother's death did not cause her to give up her religious aspirations. She was only 13 when her mother died. Maria may have helped out with her siblings for awhile, but by the time she turned 16, her father had remarried. The reasons for her not entering a convent had nothing to do with her mother's death.

I guess even inaccurate publicity is better than no publicity, though. I commend The Writer's Almanac for highlighting the fact that today is the anniversary of Maria Gaetana Agnesi's birthday: May 16, 1718.
Sitll, I consider it ironic that they begin their post by saying:


"It is the birthday of one of the first well-known female mathematicians of the Western world."

While Maria Gaetana Agnesi may have been well-known in her day, few people today have ever heard of her.  I hope that I can help change that by finding a publisher for my manuscript. In the meantime:


Happy Birthday, Maria,
or as they say in Italy: 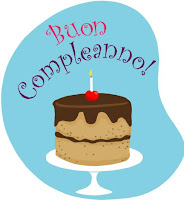 Posted by Carmela Martino at 5:40 PM No comments: