In May 2018, I shared about some of the events being held in honor of Maria Gaetana Agnesi's 300th birthday.  But it wasn't until recently that I learned of additional events commemorating the anniversary: two postage stamps were issued to honor Maria, one by the Italian government and the other by the Vatican. 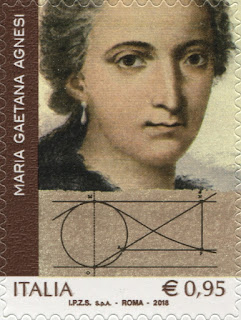 The stamp issued by the Italian government is one of a set of four celebrating “Italian Female Genius." Agnesi's stamp includes a graph of the "witch of Agnesi" curve named for her. She didn't invent the curve, and the name was the result of a mistranslation. See this post to read more about that. 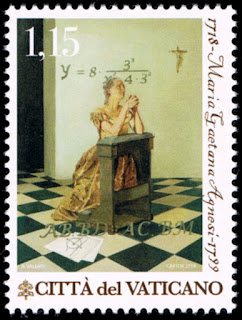 According to WitchOfAgnesi.org, a website devoted to information about Agnesi, the Vatican issued an Agnesi stamp to recognize her as an "outstanding mathematician and impassioned Catholic." The Witch of Agnesi website was established by California State University mathematics professor Shirley Gray, a long-time advocate for recognizing Agnesi's contributions to mathematics. The Vatican stamp depicts Maria in prayer, but it also includes the witch of Agnesi curve on a sheet of paper lying on the floor beside her.